2023: OBASANJO ADVISES OONI ON TINUBU, OTHERS 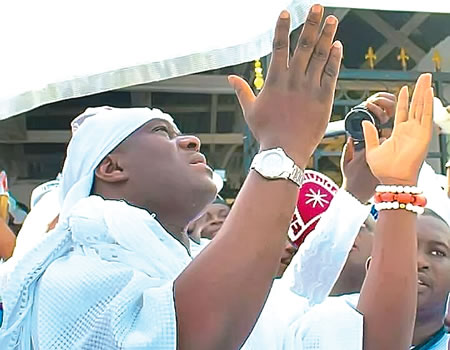 Former President Olusegun Obasanjo on Saturday advised Ooni of Ife, Oba Adeyeye Ogunwusi to strike a balance between his role as a royal father and politics in Yoruba land.

Obasanjo gave the advise to the foremost Yoruba monarch  while speaking during conferment of chieftaincy title on the Director-General of International Institute for Tropical Agriculture (IITA), Dr Nteranya Sanginga and his wife, Mrs Charlotte by the Ooni at his palace in Ile-Ife, Osun State.

The former Nigeria president obviously spoke in reaction to stories published in some blogs that Ooni has endorsed the 2023 presidential ambition of the National Leader of the ruling All Progressives Congress, APC, Asiwaju Bola Ahmed Tinubu.

Ooni was quoted by the blogs to have said at an undisclosed occasion that the the South West must speak with one voice in 2023 by supporting the presidential ambition of Tinubu.

The Ooni Palace has not denied the statements on the Tinubu’s 2023 presidential attributed to the monarch which has been circulating on social media since early in the week.

But Obasanjo pointedly advised the Ooni not to be partisan or direct the Yoruba people to support any presidential aspirant during the chieftaincy ceremony in Ile Ife on Saturday.

He reminded Ooni that as far as politics was concerned, even in the pre-independence era, the Yoruba usually had two strong sides, adding: “Please, don’t let politicians add to your burden.

Obasanjo told the Ooni: “All the sons and daughters of Yoruba land, no matter where they are or their standpoint, will come to meet you. This is expected because you are the father of all.

“Any one of them who says that he is interested in politics, just pray for him and let them go. Anyone who approaches you and says that he wants to be president.

Don’t direct Yoruba people to support any aspirant, as we don’t all go to in the same direction, which is part of our strength in Yoruba land,” he said.