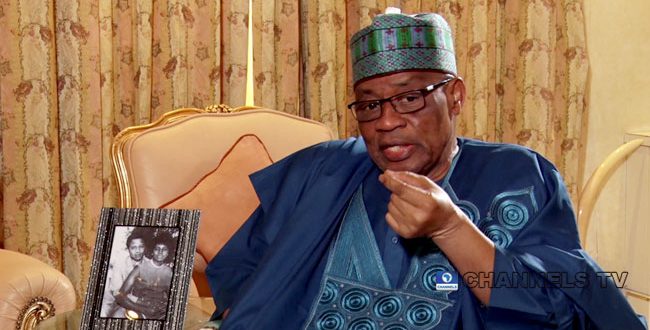 He, however, insisted a Nigerian around 60-year-old age bracket and with requisite experience remains Nigeria’s best choice as president in the 2023 general elections.

Both Atiku and Tinubu are in their late seventies and sixties respectively, and the duo are believed to be eyeing the nation’s number one seat in 2023.

In a recent interview with ARISE Television, Gen. Babangida was quoted to have said: “I have started visualising a good Nigerian leader. That is, a person, who travels across the country and has a friend virtually everywhere he travels to and he knows at least one person that he can communicate with.

“That is a person, who is very versed in economics and is also a good politician, who should be able to talk to Nigerians and so on. I have seen one, or two or three of such persons already in his sixties.”

But providing further insight into his position Sunday in an exclusive interview with Blueprint in Minna, Niger state, the retired general said he never mentioned names nor ruled out anybody as being reported by some sections of the media (Blueprint not inclusive).

He spoke to this medium ahead of his 80th birthday which comes up Tuesday, August 17, 2021 (tomorrow).

Asked if the latest call for a 60-year-old to be Nigeria’s president didn’t negate his administration’s policy which encouraged the new breed to be actively involved in politics, he said those new breed of that time are now well over 60 years of age.

The former Nigerian leader said such Nigerian must have been a public servant, private entrepreneur or professional who must have acquired some level of experience over a period of time.

Babangida said: “You the media misquoted me to say that I said Atiku and Tinubu should not contest in 2023. I never mentioned anybody. I just talked about what I think we should be looking for in the next President. My take is that at the age of around 60 years, the person must have been a public servant, private entrepreneur, a professional and would have acquired a lot of experience to rule the country. That is all; I did not say it to rule out anybody.”

“The new breed I spoke of then (as president) are well over 60 now if I am not mistaking. So, you can see that they are qualified and must have acquired the necessary experience,” he added.

On corruption, Babaginda said the problem can best be solved if tackled at source, adding that the decentralisation of governance, in the thinking of his military regime, was a sure way to fighting corruption.

“You have to fight corruption from the beginning at its source. For example, we in the military thought if you decentralised governance, it is a sure way of getting rid of certain corrupt aspect of our behaviours.”

While listing some ways out of the menace, IBB, as fondly called, recalled that in those days, his administration put in place deliberate policies to check corruption in the process of obtaining foreign exchange from banks by establishing bureau de change.

The former leader said commodity control boards were also abolished so that cocoa and groundnut farmers would not have to bribe government officials for their produce to be rated Grade A or Grade B or give bribe to get licensed.

He stressed the need for more sensitisation of the people for them to know that they don’t have to bribe government officials to get services, adding that ” the people must understand and government also needs to put in place more institutions to facilitate this aspect of our lives.”