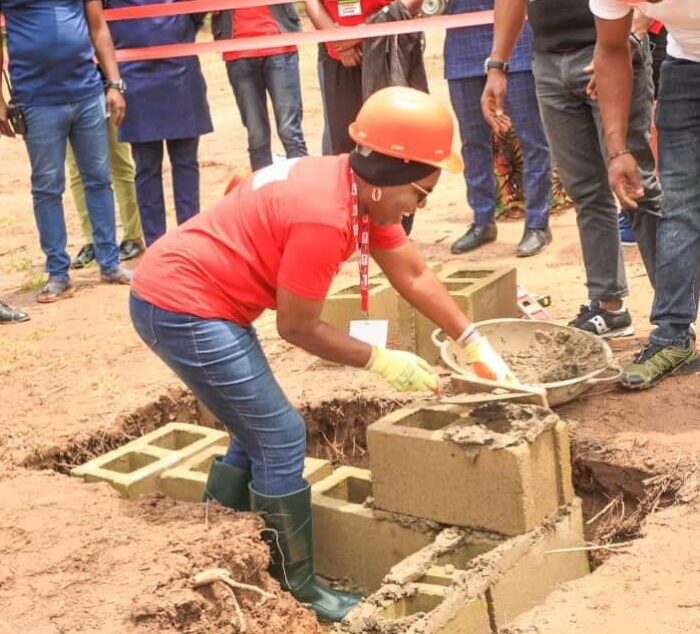 Wife of the Governor of Ondo State, Chief Betty Anyanwu-Akeredolu, has allayed fears of sustainability of the Bemore Summer Boot Camp, saying, Bemore girls would sustain the project by themselves.

The First Lady made the declaration on Sunday at the ground-breaking ceremony of the permanent site for the annual Bemore Boot Camp at Emure-Ile, near Owo, Ondo State, Nigeria.

In her words: “You’re being prepared for the future; for a new Nigeria that we will all live to be proud of. The other day, Oba Adedokun Abolarin, the Orangun of Oke-Ila, said we do not have to worry about the sustainability of this programme, I agree with his stance. For people who, out of concern, express fears and doubts about sustainability, they don’t have to worry. Bemore girls will sustain the boot camp by themselves. We will not have to go cap in hands begging for subscription and sponsorship, because my vision is for all of you to do well in academics; that is the passport to a better life as far as this universe we live in is concerned. If anyone tells you otherwise, that person is being deceptive. When you are well educated, you would have your career path and you would become a responsible woman who would define everything in her own terms.”

The Governor’s wife also described the Bemore girls as a special breed without greed, noting that they will surely give back to their various communities.

“These are a different breed of Nigerian girls who would of course grow into women with a difference. When you see a young woman doing extraordinary things, doing things differently, when you dig deep, she’s bound to be a Bemore girl. These girls will change the narrative of the status of girls and women in Nigeria, and even beyond. I have always discribed them as a breed without greed, who on their own, without prompting, would give back to their various communities. And I am seeing it already. That’s the whole essence,” Mrs Akeredolu said.

“This is our own place. It is Bemore’s own Jerusalem. Every member of Bemore family is welcome here. And you can see that we mean business. I want the best for my girls. Like I have always said, anytime I travel abroad and see what the girl child gets in other climes, I said, why not? You should also be able to get the same. When you get here, anytime, trust that you will always get the best.”

Mrs Akeredolu also mentioned that computer coding will henceforth be part of the ICT curriculum so that Bemore girls can also make money from the comfort of their homes and, in so doing, have financial security.

According to the First Lady: “Bemore girls will be taught computer coding. You really need to be coding so that, right here in Nigeria, you will be making your dollars; right in your parents’ houses, you can make money. You are well equipped, you have everything you need to start coding right now. We read about the teenagers who got amazon jobs for which they earn 10 thousand dollars. So, this is a golden opportunity that you must not take for granted.

“Nobody would dare subjugate or oppress you, and if anyone attempts to do that, you protest and speak up. There are situations when somebody may want to underrate you or your worth, you have to speak up and never to allow it. That is the whole essence. That is what Bemore has done for you. It has given you a voice.”

The First Lady thanked the Matrons, Coordinators, Partners and facilitators for their unalloyed commitment, saying, “without them, the Bemore summer boot camp won’t be complete.