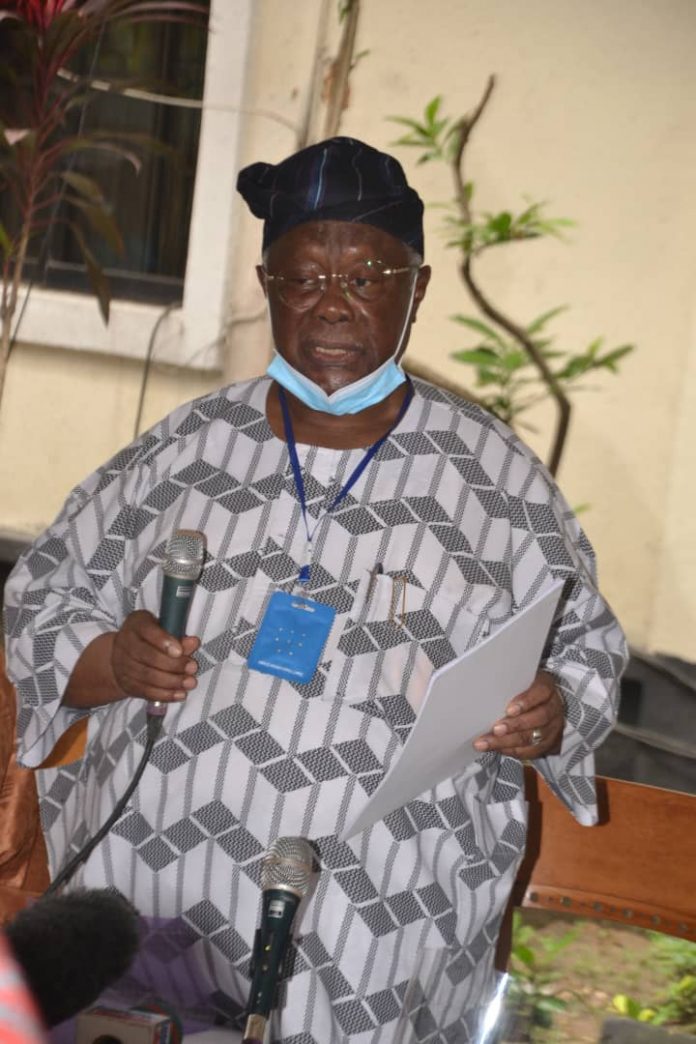 LAGOS STATE: THE ANGER AND THE RAGE

It was the immortal Dante Alighieri who told us that “the hottest places in hell are reserved for those who in times of great moral crisis maintain their own neutrality.”

Our nation has turned that frightening corner where all conscionable men and women must now choose to stand with the righteous or withdraw into the dark corridor of cowardly little men; unspoken, quiet, huddled in undignified silence.

Our system is not working. Our ethos and norms have broken down. The structures of power are hindering merit and excellence. It is this very anomaly which is much pronounced in Lagos state than any other part of our nation that galvanized the ENDSARS protests.

Naturally, Lagos is the epicentre of this legitimate protests. The choice of the protesters, the Lekki Toll gate, is very symbolic about the massive aberrations in the state of excellence which has been virtually appropriated as a personal fiefdom by Bola Tinubu, a transplanted Iragbiji native.

Lagos is gutted from within and without. For 21 years the state has perfected the crude system of cronyism, nepotistic fixation and cultish largeness. The Godfather is the epochal overlord who rules over this system of greed and prebendal license where government is reduced to a mercenary spoil system distributed among relatives, cronies, the favorites of power and various loafers around the corridors of a mangled state.

The system is contemptuous of merit or intelligence. The system is distrustful of accountability and the dictates of probity. It is all about blind acquisitions of wealth and a grovelling worship at the altar of a tin-god.

This explains the mysterious agency called Alphabeta, the consultancy firm that has been collecting 15 percent of the Lagosian Internal Generated Revenue since 1999. Created by Bola Tinubu, the firm does not do any known productive duties to enhance our revenue. It is a mere sponging apparatus, siphoning trillions from our coffers every year.

All our infrastructures have collapsed. The roads are impassable. The schools are derelict, drunkenly leaning, broken and shattered. Our children sit under leaking roofs while Tinubu and his appendages flaunt obscene riches; purchasing private aircraft, living in palatial expanses and thriving in outrageous lifestyles while hunger, abject poverty pervade our land.

It appears that the tools of power in Lagos have abandoned reasoning and rationality. They are obviously without thoughtful contemplation. A caring, enlightened and thoughtful leadership would not erect two parallel Toll gates within the state, basically fleecing the people and adding to the burden and the misery of the average citizen who must pay more on bus fares as transporters pass on the costs to commuters.

It is estimated that the state generates about 400 million naira from the two Toll gates per day. When you multiply this by weeks and months, the yearly average is a humongous figure in billions.

Now, the legitimate question is where do all these funds go to? Our roads are bad. Floods inundate houses of the rich and poor whenever it rains. Our children are drenched and bathed in dirty pool of water when it rains. Our streets are without lights. We, the tax payers, provide our own security. We provide our own water. We construct our own roads and yet, from one source alone the state generates about 146 billion naira every year. If my arithmetic is wrong, let them invite an independent audit firm from Europe or the United States to confirm the actual figures. This is a challenge. Let them pick it up.

And what’s more, Lagos state generates 50 billion naira every month from all kinds of taxes. When you multiply that by 12, that’s 600 billion naira in the kitty which Alphabeta and its owners pocket a fabulous 15 percent. Again, if I am wrong, let them bring out their books for independent audit. Despite these massive revenues, Lagos is still owing multiple creditors 28.3 trillion naira. It is safe to argue that there is a lot disturbing about their management of public funds.

Something is terribly wrong. Are some people merely just pocketing all our revenues? If not, the government should explain who is grabbing all these stupendous funds. Definitely the wealth of the state are not reflected in infrastructural development amid the general decay, abandoned projects and various ruination.

Let me advise that the two Toll gates at Lekki should be dismantled entirely. The Toll gates are now sacred grounds where innocent lives were cut short abruptly. At the Admiralty Circle Toll gate specifically where bullets rained on that black Tuesday 20- 10-2020, a monument should be erected as a permanent memorial to honor the young men and women who stood up in peaceful protests against the ills in our society.

The protesters were lawyers and doctors. Many were unemployed. There were artistes and musicians. There were Yorubas, Hausas, Ibos and all ethnic stripes that make up the Nigerian federation. There were Muslims, Christians and many various faiths.

They ate together. They slept on that cold asphalt both in the rain and in the searing sun. There were no discriminations. There were no quarrels of any kind. They raised their own money among themselves. And more importantly, they demonstrated admirable accountability that is lacking in the larger society.

They called themselves the Sọrọ Soke generation. They have spoken out loud and clear. Yes, we have heard them. And their brave deeds can never be forgotten.

It is rightly observed that when Lagos sneezes the rest of the nation catches cold. This is where we are now. The seeds of degeneration sowed in Lagos is now sprouting across the country.

And what is the response of Tinubu to the premeditated killings at the Toll gates? He strutted into the Governor’s lodge gloating, laughing, joking, sniggering, boasting that he is still the Ashiwaju of Lagos and the Jagaban to boot. He even mocked the wounded and the dead, questioning while they were there. And this is the man who falsely claims he is a Lagosian.

His reaction is most insensitive, cruel, reprehensible and wicked. He never once commiserated with the families of the bereaved. He never showed empathy for the wounded and the dead. His sole interest is the cash cow which the Toll gates have become.

Amid the decadence, the rot, the filth, the pains, the anguish and the deprivations, Bola Tinubu and his league of cronies are mocking us all. Well, the mockery will haunt them too when they are all docked at The Hague. The great Greek Philosopher and play wright Sophocles is right: “Whom the gods would destroy, they first make mad.”
Indeed Tinubu is the one that has serious questions to answer. We know his son Seyi who controls all the advert signage in Lagos state is also the owner of the advert company that placed the billboard on the Toll gate.

Questions: who ordered that the lights to be switched off before the killer squads came? Who ordered the removal of all the cameras from the Toll gate? Since the Military High Command has denied any involvement in the killings, who aided and abetted the cold-blooded murder of peaceful protesters? Who has the greatest interest in the continuation of the two Toll gates?

These are the questions that the international community should demand answers from Bola Tinubu himself. From his irresponsible and reckless bluster and his depraved triumphalism, Tinubu has betrayed a complicitous relief that the peaceful protesters were chased away and hacked down in cold blood. Tinubu is obviously a person of interest at the International Criminal Court at The Hague. He can run but he can’t hide.

When this unconscionable man imposed his wife as a Senator for the fourth term, when he installed his daughter who never owned a provision kiosk before as Iya Ọlọja, the youths can’t be happy. When the same man imposed a common motor park tout to supervise tons and tons of food meant for Covid-19 palliatives initiative, the youths will be angry.

When a former pure-water hawker in Agege is imposed as the Speaker of the House of Assembly, flaunting 40 duplexes and various outrageous assets, you are cultivating trouble.

And when a man whose origin is dubious, whose pedigree is shadowy, whose summative being is shrouded in mystery and falsehood appropriates the resources of a whole state as a private extension of his empire, we are provoking inevitable rebellion and disaster.

And when politics is turned into a revolving door where governors become senators and senators become governors, gutting our treasury through huge pensions and allowances worth over 189 billion naira every year while 10,500 professors are paid a pittance of about 4.5 billion annually we are promoting a macabre game that may consume us all.

When one unconscionable character can parade bullion vans as a war chest, we are telling the youths that hard work does not pay.

We must withdraw from the brink. We must condemn the malady of the Bullion Van Democracy. Tinubu should be dissuaded from his blind, destructive arrogance. Sanity must be restored to governance.

Let us start our own Marshal Plan by creating huge public work programs to absorb the unemployed. After the devastation of World War II, President Harry S. Truman put his nation and Europe back to work through massive public work projects. Roads were constructed, rail-lines sprouted everywhere; dams, bridges, housing projects, electrical grids and various public works arose everywhere, removing millions from the unemployment rolls. Skill acquisition programs that used to be the hallmark of FIIRO should be resuscitated.

When our youths are employed, when obscene pension schemes of immediate Lagos State Governors are scrapped, when everyone is given equal opportunities to exert his God given talents, when the ogre of nepotism and cronyism are removed from our polity, only then we may start the journey towards a national renewal and rebirth.

In summary, let me reiterate the irreducible minimum acceptable to placate the angry, restless youths in other to restore peace, fairness and equity in our state.

a. THE TWO TOLL GATES SHOULD BE DISMANTLED IMMEDIATELY AND PERMANENTLY.

b. ALPHABETA AND LEKKI CONCESSION COMPANY SHOULD BE SCRAPPED

c. THE ADVERT SIGNAGE MONOPOLY GIVEN TO SEYI TINUBU SHOULD BE WITHDRAWN FORTHWITH.

d. THE IYA ỌLỌJA TITLE SHOULD BE WITHDRAWN FROM SHADE TINUBU AND BE GIVEN TO THE INDIVIDUAL WHO DESERVES IT ACCORDING TO TRADITION.

e. THE NURTW WHICH HAS BECOME THE MILITIA WING OF THE APC IN LAGOS STATE SHOULD BE REORGANIZED AND REMOVED FROM THE AMBIT AND THE CONTROL OF POLITICAL ACTORS.

f. THE OUTRAGEOUS PENSION SCHEME FOR IMMEDIATE FORMER GOVERNORS OF LAGOS STATE SHOULD BE SCRAPPED. THE PRODIGAL ALLOWANCES GIVEN TO MEMBERS OF THE LAGOS STATE ASSEMBLY SHOULD ALSO BE SCRAPPED.

g. THERE SHOULD BE FREE EDUCATION FROM PRIMARY TO SECONDARY SCHOOL LEVEL IN LAGOS STATE

h. FREE HEALTHCARE SERVICES MUST BE GIVEN TO THE NEEDY.

All these can be easily funded from the outrageous allowances and pension schemes given to both serving and former public office holders.

Finally, let justice prevail over the graves of the Lekki Toll gate heroes and the millions of the members of the Sọrọ Soke generations still wasting away in our cities and the slums. May God bless this nation and heal our wounds.