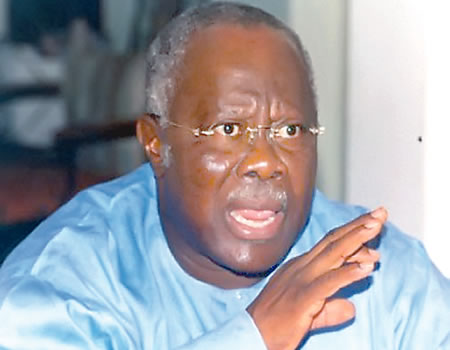 A chieftain of the Peoples Democratic Party (PDP), Chief Bode George, has berated a former Osun State Governor, Bisi Akande, over the content of his recently released autobiography, ‘My Participation.’

In an interview on Arise News on Monday, George said Akande should have applied wisdom while writing his 559-page autobiography.

The former Deputy National Chairman of the PDP stated that some statements made by Akande in his book are not expected from someone of his age and status.

According to the PDP stalwart, some of the allegations in the book were designed to ridicule politicians who are opposed to Akande’s views.

George said that is the reason those mentioned in the autobiography and other political stakeholders have started rejecting claims made in the book.

He added that the book was meant to propagate the presidential ambition of the National Leader of the All Progressives Congress (APC), Bola Tinubu.

Speaking further, George lambasted Akande for launching the book in Lagos, asking why the former APC chairman did not launch the autobiography in Osun state where he was a governor or in Ibadan where he was a former Secretary to the Government of Old Oyo State.

Recall that George had asked Akande to immediately withdraw his book from circulation ad apologize to Yoruba elders dragged in the document.

He had said: “Akande must apologize openly to Yoruba elders. The attitude that he displayed is not acceptable in a civilized society. Is it his legacy to dishonour Yoruba elders?” the statement reads.

“At his age, Akande should not set his house on fire because of Tinubu’s ambition. I felt very bad as a Yoruba man and as a Nigerian. He has maligned Yoruba elders and highly respectable people in the country.

“He was busy giving kudos to Bola Tinubu. Baba Akande is from Osun State and Tinubu is the only man that he could single out to praise.

“From the reaction to his book, you must have heard what Baba Adebanjo said. How are we going to be regarded by others? Is that the right thing to do?

“Baba Akande should withdraw the book that he has authored. It is very shameful. He is older than me and I don’t expect an elderly person to behave in that manner. He must apologize to those he has offended.”