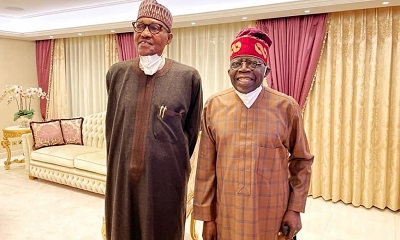 In the images of the visit which was shared, both Buhari and Tinubu were seen in discussions. In another image, Tinubu was seen holding a walking

Details of their discussions were not available as a the time of filing this report.

It was however gathered that both reviewed the situation of economy, insecurity and ethnic agitations in the country.

Buhari’s, who himself is in London first to attend a summit on education and later see his doctor, comes after last week visit by the Lagos State Governor Babajide Sanwo-Olu.