Court remands two over alleged murder of minors in Ekiti 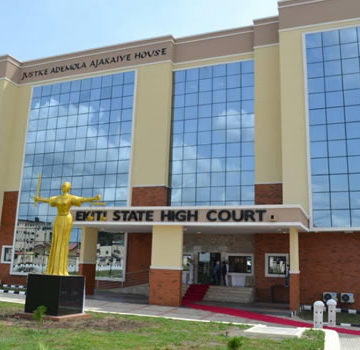 The Chief Magistrate, Mr Abdulhamid Lawal, ordered the detention of the defendants in the Correctional Centre pending legal advice from the office of the Director of Public Prosecutions.

He later adjourned the case to Dec. 23 for further hearing

Earlier, the Police Prosecutor, Mr Caleb Leranmo told the court that the defendants committed the offence on Oct. 11 at Oye-Ekiti.

Leramo said that the defendants, on the said date, murdered the two children, a five-year-old girl and seven-year-old boy (names withheld).

He explained that the children had been sent by their grandfather to buy provisions at a corner store, but their corpses were later discovered in an abandoned car.

Leranmo said that if the defendants were found guilty by the court, they were liable to punishment under Section 324 and 319 (1) of the Criminal Code, Cap. C 16, Laws of Ekiti State, 2012.

He said he had forwarded the case files to the Directorate of Public Prosecution for legal advice.

Counsel to the defendants, Mr Opeyemi Ogunremi, sought for a date of adjournment pending the legal advice from the DPP.