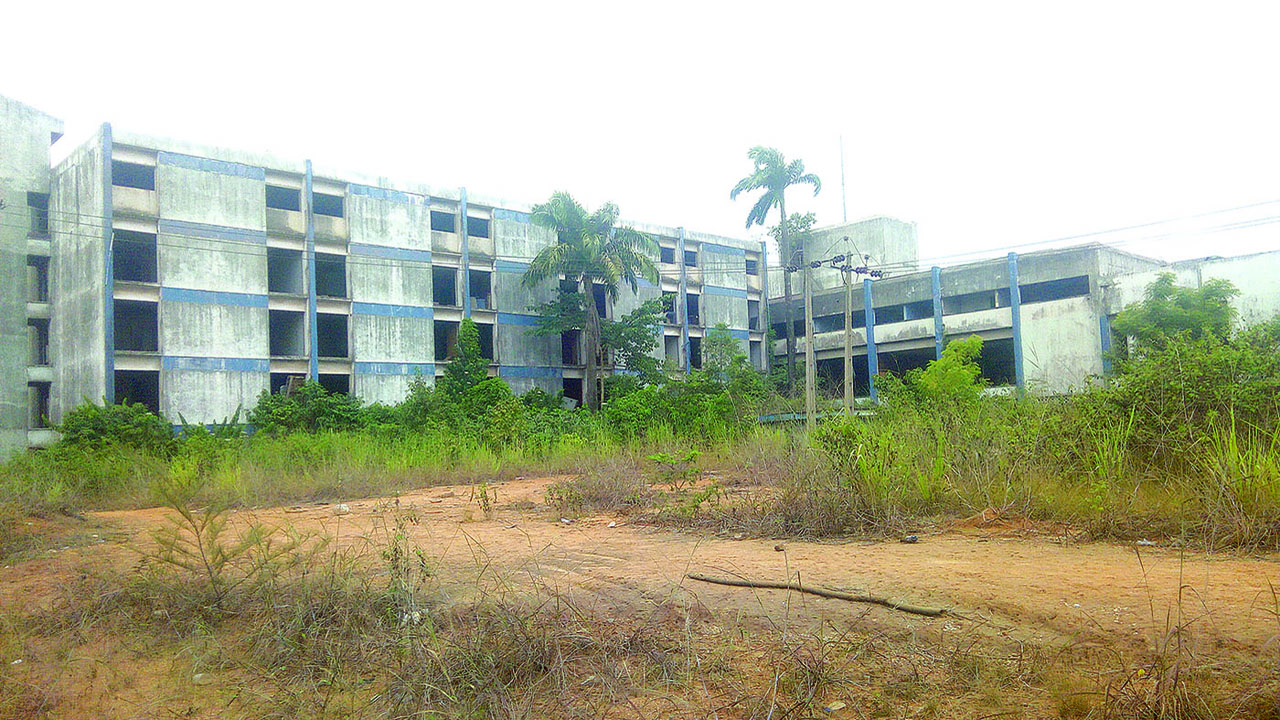 BANKOLE JOSEPH writes on the current state of desolation of what was once the pride of Ogun State, the Gateway Hotel, Ota, owing to a political war among the state’s gladiators

Despite its strategic location and proximity to Lagos, the commercial centre of Nigeria, the Gateway Hotel, Ota, one of the three hotels established by the late former governor of Ogun State, Chief Olabisi Onabanjo, has been abandoned and is currently in ruins.

The Gateway Hotel, Ota, is located less than 100 metres away from the old Sango tollgate, a location that serves as the boundary between Lagos and Ogun states. The once magnificent edifice sits on the right when coming into Sango from Lagos.

The administration of Onabanjo, who was the first democratically-elected governor of the state between October 1979 and December 1983, built three hotels in the 1980s while holding sway on the platform of the defunct Unity Party of Nigeria to demonstrate equal distribution of wealth in Ogun State.

The administration had situated the hotels in the three senatorial districts in the state – Egba, Yewa/Awori and Ijebu.

The one for Ijebu was situated in Ijebu-Ode and has now become Equity Resort Hotel; the one for Egba is situated in the Kuto area of Abeokuta, the state capital, and has become the Park Inn by Radisson, while the one for Yewa/Awori remains the Gateway Hotel, Ota, which is located along the Lagos-Abeokuta Expressway.

Findings show that the Gateway Hotel, Ota, is the biggest of the three with 350 rooms and suites.

After some years, the administration of Otunba Gbenga Daniel between 2003 and 2011 gave out the three hotels to private investors as concession for a period of 25 years.

Daniel claimed that it gave out the facilities as concession because they were being run at a loss. He lamented that since they were established, only N27m had been realised from the three hotels.

Eight years later, the Ibikunle Amosun administration, which was in the saddle between 2011 and 2019, set up a judicial commission of inquiry to look into the state properties sold or given out as concessions by his predecessor.

The report of the commission was published by the state government in February 2012. It was established that Gateway Hotel, Ota, was given to MIDC Limited as a concession and sub-leased to ARTEE Industries Limited.

The report added that the concessionaire took over in 2009 with a promise to complete the refurbishment of the facility within 18 months, but allegedly failed to do anything after two and a half years.

While implementing the recommendations of the commission, Amosun terminated the concession.

Unfortunately, the current situation of the hotel shows that apart from the fact that the massive building is standing in a jungle of overgrown weeds and trees, the whole building has become dilapidated.

Some of the luxury items, including the decorative lights in the halls and conference rooms, have been looted.

A former worker in the hotel, who spoke on condition of anonymity, said there was nothing left in the building that could remind anyone of what it used to look like.

He said all appliances, windows and doors, including their frames, as well as air conditioners and fans had disappeared.

The cinema section of the hotel has become a dusty dark room with no relic of its original state.

It was also gathered that since the building was left to rot and became an open space for anyone to access, miscreants had made away with every valuable item they could lay their hands on.

Giving the historical facts of the hotel, an indigene of Ota, Kayode Taiwo, told our correspondent that the hotel was established in 1982 by the late Onabanjo and had 350 rooms and an Olympic-sized swimming pool.

According to him, the hotel had a main banquet hall, three conference halls, cinema halls, shopping mall, a penthouse, car park for over 1,000 vehicles and two sets of power generators.

“Gateway Hotel, Ota, is strategically located on the hilly side of the Ota-Lagos boundary close to the popular Ilo-Awela River,” he explained.

“Historically, the hotel was strategically located to douse the agitation of the Ota people over their request to merge with Lagos State,” Taiwo added.

On what the Ota people had lost to the mismanagement of the edifice, Taiwo said, “The hotel, at its peak, provided huge economic platforms for small businesses, theatre performance and film making, including musicals.

“It also provided employment for young people in and around Ota.

“Gateway Hotel, as an edifice, provided beautiful aesthetic value to the environment and was a huge place for tourism.

“Services provided during festivals include relaxation, swimming, keep fit and performances by artistes were regular getaway opportunities for corporate and individual guests.

He said, “The situation with the Gateway Hotel, Ota, is that the concessionaire that got the place was not as fully prepared as those that got the other two locations.

“We discovered this even before we left office and we gave him a letter to the effect that he should do certain things or we would cancel the concession, and we agreed on what would be done in the place; we also issued a warning.”

Isiaka disclosed that due to MIDC’s inability to procure funds for the project, the concessionaire entered into an agreement with Gateway Holdings and ARTEE Industries Limited, the owners and operators of the famous Park ‘n’ Shop brand.

He said ARTEE Industries Limited was granted a development lease for a term of 23 years less three days, which meant the unexpired residue of the term granted to the MIDC in respect of an area measuring approximately 2.153 hectares to be used for a shopping mall.

“Even the day I appeared before the judicial panel, I told them that I remain proud of what we did there. Yes, there might be one or two things that probably should have been delayed or done better; there will always be things like that.

“Unfortunately, when we left office, another government got there. It is left for that government to manage the process. So, all these stories that we were the ones that sold the hotel at a cheap price are rubbish.”

Speaking on the plans of the current government on the moribund hotel, the Commissioner for Culture and Tourism, Dr Oluwatoyin Taiwo, said the Dapo Abiodun administration had begun the search for genuine investors.

He confirmed that the place had been messed up due to neglect by the previous administration.

The commissioner stated, “When we came on board at the ministry that is responsible for supervising most of the hospitality industries in the state, we were saddled with the responsibility by the governor to visit most of the tourist sites and most of the properties that we have under our purview and jurisdiction as the Ministry of Culture and Tourism.

“It may interest you to know that the Gateway Hotel, Ota, was one of the places we visited.

“We sent the Director of Tourism Development and Promotion and some of his members of staff so that they would give us the state of things despite the fact that we knew the public opinion about it. The government did not stop what it wanted to do and now decided to go there to see for ourselves the state of things. They brought back their report.

“We don’t know who did that and then the environment, only God knows the number of years that it has been abandoned, has become the dens of hooligans and we learnt that some Hausa/Fulani have started inhabiting the area.”

On the plans by the Abiodun administration for the facility, Taiwo said, “When we got the report, our plan as a government is to make sure that we resuscitate it to make it better than what we met on the ground and to also make sure that we develop it to the extent that it will have good looks that will be appealing and it will be able to complete with most of the five-star hotels that we have in the world.

“Our plan is to make sure that we give a private organisation an opportunity to come in; it is a potential that the government is looking towards getting an investor, who will be ready to take it up; so, that is the government’s stand on that property.”

On if the investor had been chosen, the commissioner stated, “For now, consultations and some other things are going on. But, as we speak, there has not been any investor that has signed on that property.

Several attempts to get reactions from those who served in Amosun’s administration failed.

The former Commissioner for Commerce, Trade and Industry, Bimbo Ashiru, said he did not want to make any comment on the issue so as not to be misunderstood.

Also, the  former Secretary to the State Government  during Amosun administration,  Taiwo Adeoluwa had  not replied  to a  text message sent to him as of the time of sending this report.