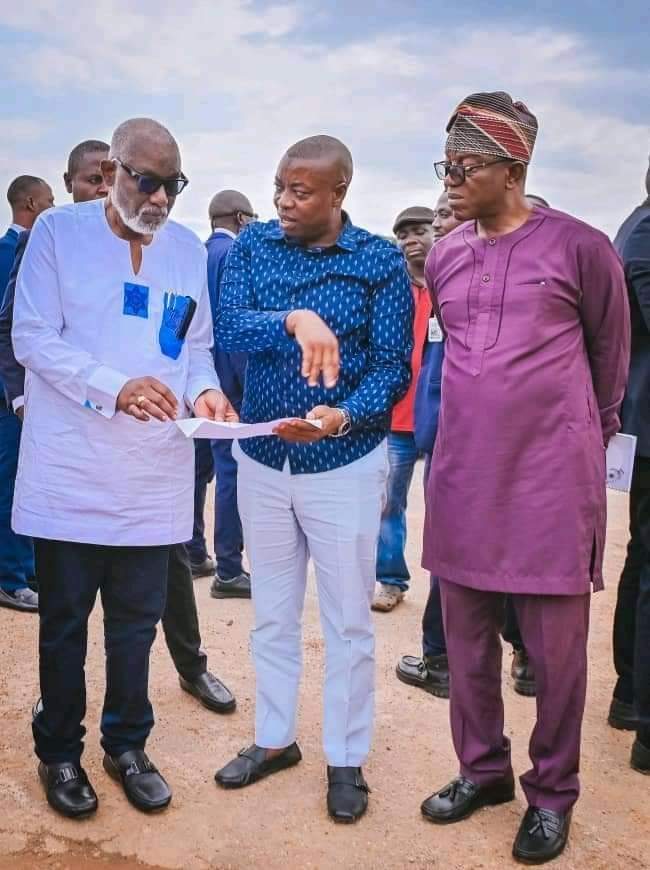 Governor Akeredolu, at the construction site, said that the dualisation of the Airport main gate road became imperative owing to bad portions on the road.

While noting that the road is one of the major entrances in the State capital, the Governor said the road would beautify and make easy access to the Airport.

Governor Akeredolu said: ”I passed through this road and discovered that there were a lot of potholes. And I said look, this is one of the major entrances to Akure. Those going to the Airport, those leaving the Airport and everybody will pass through this road. For a very good reason, the entrance must be motorable.

“So, I felt we should expand it and make it a dual-carriage way. That is why we are working on this. I believe that by the time we are through we will have easier access to the Airport and it will be so beautiful.”

The Commissioner for Infrastructure, Lands and Housing, Engr Raimi Aminu and the representative of the Airport Manager, Mohammed Oluwaseun, commended the Governor for always fulfilling his promises.

They also hailed the Governor for his unwavering commitment to infrastructural development across the state.

The commissioner said the Airport main gate is very important to the government as anybody coming into the State or neighbouring states by air will pass through the road.

“We have done so many projects in the town and this will be a synosure. We are very happy within the last few days we have started working here so many people have been praising us and showering encomiums on the government and we are so happy.

“This project is to be undertaken by the Direct Labour Unit, and this is part of practical experience for our new engineers. This is part of what Mr Governor has been clamouring for since the inception of this administration in term of capacity training.

“Our engineers, the young ones and even the old ones are also being trained because we have so many experts in our area. So, kudos to the government and kudos to Mr Governor. By God’s grace, very soon this project will be delivered.

“It has standard hydraulic structures with walkway of 2.4metres both sides, the median is 1.5metres and it is going to be stone based. We have binder course before the asphaltic pavement, and then we have the wearing course. The total binder and wearing will be going to about 90. So, it will stand the test of time.”Aminu stressed.