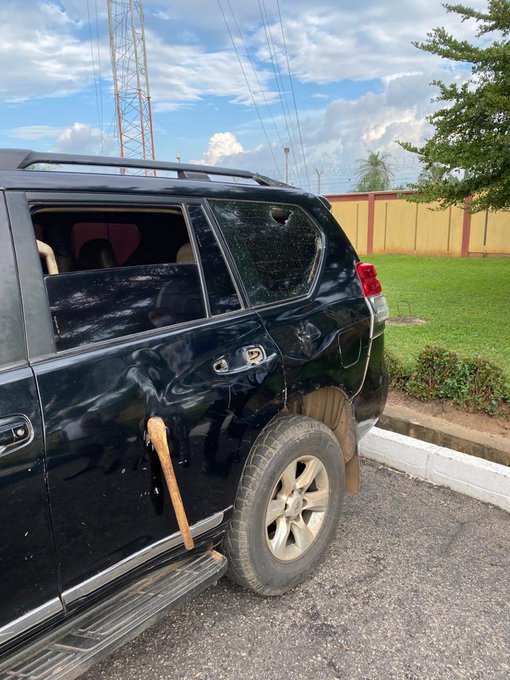 Funke Egbemode, commissioner for information Osun state, says the attack on Gboyega Oyetola, the governor, at the #EndSARS protest ground in Osogbo, the state capital, was a premeditated attempt to assassinate him.

Oyetola was said to be addressing protesters at Olaiya junction in Osogbo, the state caqpital, when suspected hoodlums launched an attack on the crowd.

One person was killed while several others sustained injuries in the attack. Two cars in the governor’s convoy were also damaged.

Reacting, Egbemode, who was also at the scene, said the attack was beyond the #EndSARS protest and that the attackers were not protesters.

She expressed sadness that the attackers had infiltrated the peaceful protest to execute their take sinister intentions.

“It was an assassination attempt. This was certainly beyond the #EndSARS protest. The people who launched the attack were not protesters at all,” she said.

“Protests have been going on in the state for some days now, and there had been no attack on any government official since the beginning of the protest.

“However, today’s attack changed the narrative. It was not a spontaneous attempt. The attackers had it all planned. They had guns and other weapons. In fact, it was a woman who smashed the windscreen of the vehicle of the Secretary to the State Government, Prince Wole Oyebamiji where I was.

“It is really sad that these people infiltrated the ranks of the peaceful protesters and took advantage of the governor’s walk with the youths to execute their sinister intentions.

“It was simply a street coup to take out the governor, his deputy and the secretary to the state government, all of whom were exposed during the protest and had to be smuggled into vehicles when the attack was launched.”