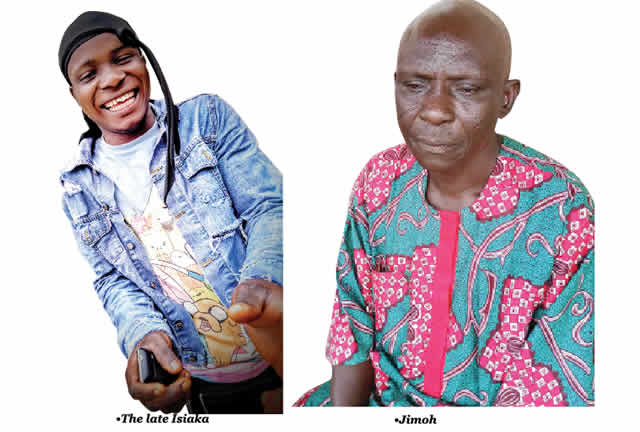 What can you tell us about your late son?

How did you learn about his death?

I didn’t have any premonition about his death. But that day, I went with one of my regular customers to carry cartons of fish at the Aroje area. When we were coming back, I saw some tools of the vocation he was learning. I saw a ladder and other things and I told a woman that I wanted to buy the ladder for my son, Isiaka. The woman said I should go and find out the price of the ladder. I went and asked the seller and he told me it was N73, 000. I didn’t buy it but I had it in mind to buy it for him. Immediately we left that place, I received a call from Basirat, Isiaka’s sister. She told me that the police had shot my son. I was told that my son just came out to the junction of Alada Baptist Church when he was hit by a bullet. I was told he saw that there was confusion afar and he stopped at the junction and that was where he was shot and killed.

Where did the bullet hit him?

I believe the policeman, who killed him, shot directly at him because the bullet hit his left side. It pierced through his rib. Isiaka’s elder brother was called and he rushed there to carry him to hospital. That was how he was rushed to Bowen University Teaching Hospital.

Was he part of the protest?

No. He just came out to the junction at a very wrong time and that was why he was hit by the bullet.

Was he ever arrested or harassed by the police?

There was nothing like that. He was neither a troublemaker nor a thief. He was never arrested. He was a hardworking young man. He went to Lagos on his own to go and work to raise money for his ‘freedom’ and to buy tools which he would need to be on his own. He stayed in Lagos for about a year and we asked him to come back. We had even fixed a date for the ceremony. It was slated for April, 2021, but death has cancelled that. The crisis which happened on Sunday was because many people were angry that Isiaka was killed on Saturday. The situation became tense when the police started shooting at those protesting on Sunday.

Are you aware that those who protested attacked Soun’s Palace?

I learnt that they did not set out to attack Kabiyesi (monarch) or the palace. I later heard that the protesters went to the palace to draw the attention of Kabiyesi to the killings, which continued on Sunday, and that was where the crisis escalated. They took the corpses there and I was told soldiers were deployed and they started shooting again. That was how the town started to boil afresh. I did not go there but we heard gunshots repeatedly.

Are you aware that SARS has been disbanded?

I also heard the news. I thank the Federal Government for that. If there was no #EndSARS protest, what happened to me (losing my son) probably would not have happened. So, I thank God that the government has listened to the cry of the people in a way. The policemen attached to SARS have committed a lot of evil against many, so we thank God that the episode of SARS’ wickedness has ended but it’s unfortunate my son was killed. I also heard that they have replaced them with SWAT. But my appeal to the government is that they should limit the kind of power they will give to the new set so that they won’t end up being tormentors of the people like the SARS they are replacing. They gave too much power to SARS and that was why their personnel misbehaved.

We don’t want beasts, like SARS officers, as a replacement.

I am sorry that I am sounding too harsh against them. Very many of the policemen with SARS are not responsible at all. They carried out extrajudicial killings, extortion and they kept people in detention for months without taking them to court. They would ask for the kind of money they know the parents or relatives of suspects do not have. They demand as high as N500,000 as a bribe.

Have you ever been harassed or brutalised by the police?

I am a driver and it has happened in the course of my duty. I was stopped in Oyo town one day by a team of policemen. After checking my vehicle documents, the policeman discovered that all my papers were complete and up-to-date. He then demanded that I should produce a paper to prove that I am the owner of the number plate. I asked him if he was serious with his demand because I have been driving for over 30 years. I have proof of ownership, insurance and everything and the registration number is the same on all the documents. Why was he asking for that? I was not ready to give him any bribe because there were no passengers in my vehicle so he delayed me and I sat in the vehicle. He delayed me for about three hours just because I did not give him N50. I was ready for him that day but after, he said I should go.

What is your appeal to the government?

I thank Governor Seyi Makinde for the steps he has taken so far. I appreciate him because some governors might not have said anything but he came from Ibadan to commiserate with us. This shows that he is humane. But I want to appeal to him to do something that will not make us forget Isiaka. Isiaka left a child behind. He left a daughter and I will not want the daughter to suffer. I want her to go to school.

How old is she?

She is two years old and we were planning to take her to pre-school after her dad might have started his vocation on his own. So, I don’t want his dream for his daughter to end just like that. I want the governor and others to help in this regard and in any way they can help us.