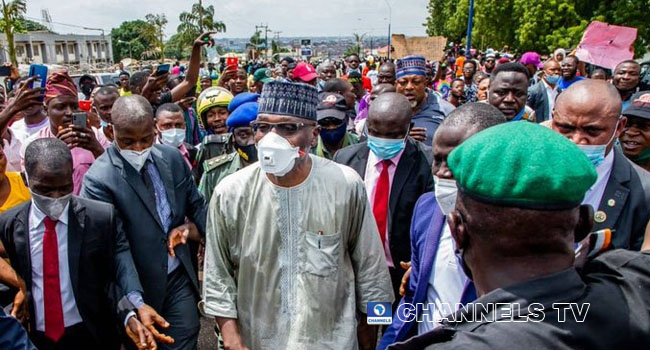 As demonstrations against police brutality and extra-judicial killings continue across the country, Kwara State governor Abdulrahman  Abdulrazaq on Thursday joined a crowd of #EndSARS Protesters as they marched to the police headquarters in Ilorin, Kwara State capital.

Governor AbdulRazaq marched with the youths after addressing them and assuring them of his support.

He also asked for the list of victims of Special Anti Robbery Squad (SARS) brutality in the state.

The protesters had earlier stormed the government secretariat blocked the entrance and insisted on seeing the governor to address them.

In his address, the governor said efforts are in place to meet the demands of the protesters.

He explained that he and some other governors and some businessmen have recently held a zoom meeting with some individuals involved in the protest movement following which their five-point demands were forwarded to President Muhammadu Buhari.

He also announced the setting up of an ombudsman through which people can channel their grievances and have same attended to in the state. He said the ombudsman would be the go-between for aggrieved citizens and security agencies.

“However you look at it, we are all victims. I have since joined the protest. Some of you may notice online that I joined a Zoom meeting on Monday with Hajia Aisha Yesufu, Aliko Dangote, Wizkid and others to arrive at a resolution on this protest.

“It was part of this that led to the five-point agenda which is being implemented now by the federal government. The President is definitely listening to the complaints,” AbdulRazaq said.