Many Injured As APC Members Fight Dirty During Meeting 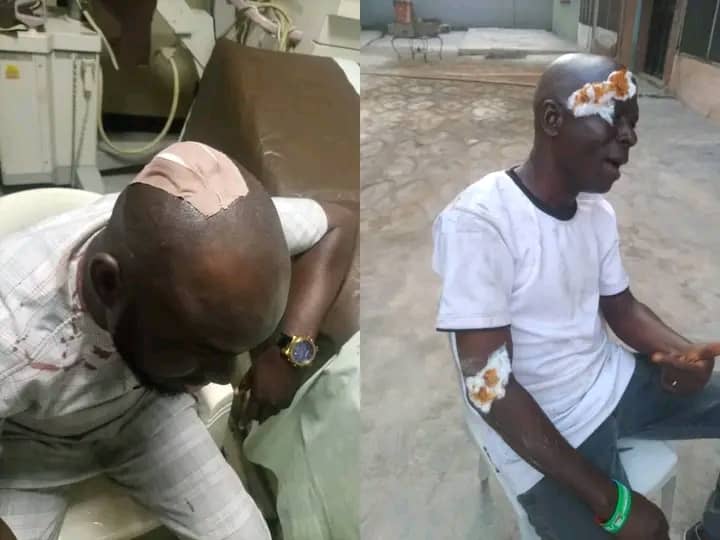 …Two members of the All Progressives Congress have been injured after violence broke out over a power tussle in the Surulere area of Lagos State.

It was gathered that the power tussle between members of the Coker-Aguda chapter of the party degenerated into a brawl after some members accused the party leadership of “hijacking of political powers and positions”.

The aggrieved camp said the crisis has continued to linger despite efforts by the party’s leadership in the state to find a lasting solution to it.

,,,A petition written to the APC leadership in the state reads, “The party leadership in Lagos State set up a reconciliatory committee across the three Senatorial Districts of Lagos State sometime in July 2021. The Committee for our Senatorial District (Lagos Central) was headed by Price Rabiu Oluwa and the Secretary of the Committee was the current Chairman of the party, Hon. Cornelius Ojelabi.

“After hearing from both parties, the Committee appealed to all the aggrieved party members and charged us to ensure we worked for the success of the party in the 2021 local government elections in our LCDA, a directive which we all followed to the letter.

As directed by the party leadership during the reconciliatory committee meeting, we agreed and wholeheartedly worked for the success of APC in the last local government elections. But alas, we were shortchanged again by the power hijackers in Coker-Aguda LCDA.

,,,,“We later realised that we had been randomly deceived and tossed around by different categories of leadership we met towards resolving the political logjam in Coker-Aguda LCDA APC. The leaders ranging from Prince Tajudeen Oluyole Olusi, Hon. (Pastor) Cornelius Ojelabi, Chief D. O. Adenekan, Hon. Abayomi Daramola, among others.
Party leaders at these enviable positions have not been able to resolve our matter amicably. Rather, Hon. Abayomi Daramola has always been thwarting our efforts, no matter how good we saw it.”

The aggrieved parties accused one Alhaja Omobolanle Akinyemi-Obe of leading thugs to brutalise party members who are not in her camp, an act they said led to the hospitalisation of two members of the party.

,,,,“On two different occasions, Alhaja Omobolanle Akinyemi-Obe has sponsored political thugs to attack party members and inflict various degrees of injuries on them in the process. One of the incidents in the presence of party leaders and members, where the thugs terribly injured one Sunday Olanipekun, former Councillor of Irone/Sanya Ward.

“Another was at the Acme office of our party, in the presence of Hon. (Pastor) Cornelius Ojelabi, Hon. Abayomi Daramola, Hon. Lateef Ibirogba, etc. Party members were terribly injured also. But alas, these state leaders could not even come out to sympathise with us, except Hon. Lateef Ibirogba,” they added.

…..The aggrieved members vow to work against the party in the 2023 elections, at the state and federal levels if swift intervention is not made.

As dedicated and loyal party members of APC, we can’t fold our arms at this critical stage of our political lives and watch our political efforts and activities being jeopardized by those who are concerned with hijacking of political powers and positions.
,,,,,“The crisis has eaten deep into the party structures in the LCDA, such that, APC impending electoral loss in the 2023 general elections is seemingly inevitable,” they added.