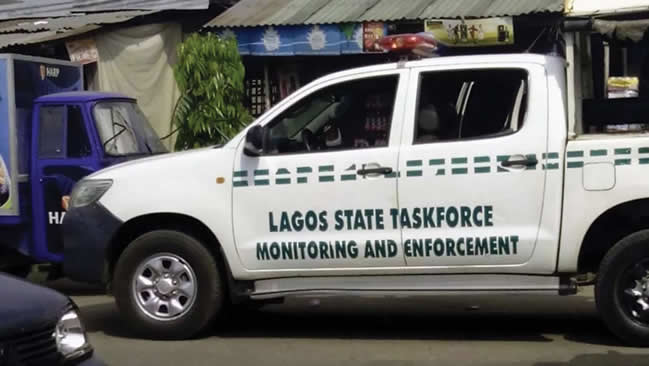 A Lagos-based businessman, Adeolu Oyinlola, has accused some policemen attached to the Lagos State Environmental and Special Offences (Enforcement) Unit, aka task force, of impounding his vehicle over an alleged traffic offence.

PUNCH Metro gathered that Oyinlola’s driver, Sunday Emem, was driving along the Apapa-Oshodi Expressway on Saturday when he was accosted by one of four policemen around the BOC Gases area for allegedly passing a uni-directional road (aka one way).

According to Oyinlola, there was no indication on the road that it was uni-directional, adding that efforts to explain to the policemen that there was no such indication proved abortive as they became hostile and aggressive.

Our correspondent, during a visit to the area on Monday, observed that there was no signage on the road as traders confirmed same.

Speaking to our correspondent on Monday, Oyinlola said his refusal to part with the money demanded by the policemen made them impound his car and book him for a court appearance on Monday, which was later postponed to Thursday.

He said, “We were coming from the DHL side of the Apapa-Oshodi Expressway and we didn’t have any business on the service lane of the Isolo-Apapa Road, but because they had blocked the Airport Road, we decided to turn to the road leading to Bolade-Oshodi to get to Ikeja.

“The four policemen forcibly entered the vehicle; one of them chased my driver to the back seat and took over the steering. I came down and opted to walk to their office because I could not squeeze myself with them inside the car because of COVID-19.

“They brought us to the back of their office, trying to negotiate and I think it’s their mode of operation; they will first bring you to the back of the building and if negotiation breaks down, they will take the car into their office, which was what they did to us because we refused to part with money. They took the car into their compound. When I told them that there was no sign where we were arrested, they became belligerent.

This kind of attitude is wrong and frustrating; the government will allow people to be extorting money from residents and you don’t have anybody to report to for this organised racket to stop. What they are doing is that they are scamming people and it is with the complicity of the government. How can you be ambushing people without any sign and you’re saying they are taking one way?

“We want this scam to stop; they impound people’s cars and collect loads of money and just to inconvenience us, they asked us to come to court this morning (Monday); we got here and they casually told us to come on Thursday for no reason whatsoever. I want justice and my vehicle released. I will go to court to demand damages.”

The task force Public Relations Officer, Femi Malik, promised to investigate the incident and get back to our correspondent.

He said, “I am aware that our men will not go and stand in a place that is not one way and arrest anyone, but I need to find out if this is true or not. I will investigate and get back to you.”