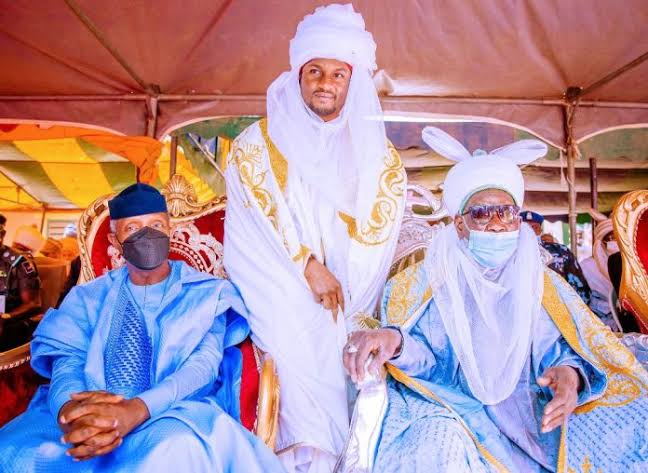 The Emir of Daura, Alhaji Farouk Umar, has described Vice President Yemi Osinbajo as a noble man and trustworthy person who keeps his promises.

The traditional ruler expressed this view on Saturday at the turbaning ceremony of Yusuf Buhari, son of President Muhammadu Buhari as Talban Daura and district head of Kwasarawa community.

The vice president witnessed the turbaning ceremony—a well-attended event graced by dignitaries from across the country.

“We extend our appreciation to the representative of the president.

“He, the vice president is a nobleman who keeps his promises and a trustworthy person who has so much patience and knows what to do at any given time.

“The vice president is a very good man; he is my favourite person. He is a very nice and honest man,” he said.

Umar praised President Muhammadu Buhari for his leadership qualities, adding that ‘power belongs to God and He gives it to whoever He pleases.’

The Emir disclosed that the Daura Emirate Council decided to honour the president and his family with the traditional title being conferred on Yusuf Buhari, especially since being president, he would not be able to take any other title.

Commending both the state and Federal Governments, the traditional ruler testified that the Katsina State Government had been working hard to end the difficulties of the masses.

He added also that Daura had been transformed under the leadership of the president, lauding him for the developmental strides witnessed so far.

Others were the Chief of Staff to the President, Prof. Ibrahim Gambari, the Secretary to the Government of the Federation, Boss Mustapha and members of the Federal Executive Council including Chief Ogbonnaya Onu, Science and Technology Minister; Hadi Sirika, Aviation Minister and Clem Agba, Minister of State for Budget and National Planning.