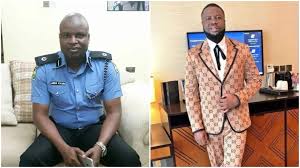 Again, proceedings in Abba Kyari’s extradition to the United States suffered a setback at the Federal High Court in Abuja, yesterday.

The embattled Deputy Commissioner of Police (DCP) and former head of the Inspector-General of Police Intelligence Response Team (IRT) are enmeshed in an allegation of $1.1 million wire fraud involving an Instagram celebrity, Abbas Ramon (popularly known as Hushpuppi).

The U.S. government has requested Kyari’s extradition to answer for his alleged complicity in the crime.

Attorney-General of the Federation (AGF) and Minister of Justice, Abubakar Malami, filed an extradition application at the Federal High Court, Abuja, following a request by the Diplomatic Representative of the U.S. Embassy in Abuja.

He said the request was “for the surrender of Abba Alhaji Kyari, who is a subject in a superseding three-count indictment.”

In his argument, counsel for the AGF, Pius Akuta, told Justice Inyang Ekwo that the case was for a “preliminary hearing.”

Countering, Kyari’s lawyer, Nureni Jimoh (SAN) informed the court that he had not been served relevant papers.

After entertaining arguments, the judge, therefore, to the lawyer, to upon service, respond to the court papers within 14 days.

He, consequently, adjourned to April 27 for the continuation of the hearing.

ALSO, A Federal High Court, Abuja, yesterday, sanctioned the initiation of contempt proceedings against the Minister of Transportation, Rotimi Amaechi, following complaints that he flouted an earlier order.

Justice Donatus Okorowo gave the order after being informed that the minister allegedly violated an order for the maintenance of status quo issued on January 22, 2022, in a suit filed by a civil group, Incorporated Trustees of Citizens Advocacy for Social and Economic Rights (CASER), challenging Amaechi’s handling of the process of appointing operators of the International Cargo Tracking Note (ICTN) in Nigeria.

In the suit, CASER alleged among others, that Amaechi had “manipulated the appointment process to the benefit of two local and inexperienced firms – Medtech Scientific Limited and. Rozi International Nigeria Limited.”