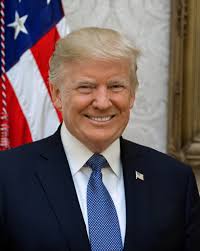 President Donald Trump entered his final day of campaigning for reelection Monday by dismissing polls that show him headed for a humiliating loss, while Democrat Joe Biden urged Americans to draw a line under the “chaos” of the last four years.

“I watch these fake polls,” Trump, 74, told a crowd in Fayetteville, North Carolina, on the eve of Election Day. “We’re going to win anyway.”

The Republican’s gripe at pollsters — combined with angry swipes at everybody from journalists, social media CEOs, his defeated 2016 opponent Hillary Clinton and Democratic opponents in Congress — reflected the bitter mood as he faces the possibility of being removed from the White House after one term.

When he wasn’t complaining about his “crooked” opponents, Trump focused back on his months-long attempts to paint Biden as “sleepy” and “corrupt,” leading the crowd to chant: “Lock him up!”

And Trump sought to recapture the spirit of his shock win four years ago by casting himself as the rebel against an “arrogant, corrupt, ruthless” establishment.

“You elected an outsider as president who is finally putting America first,” he told the crowd. “Get out and vote, that’s all I ask.”

But Biden, who has built his campaign on casting Trump as a reckless failure during the coronavirus pandemic, scents victory.

Opinion polls give him small but steady advantages in all the swing states that tip close elections and even threatening Republican strongholds like Georgia and Texas.

Tuesday is formally Election Day but in reality it marks the culmination of a drawn-out election month.

With a huge expansion in mail-in voting to safeguard against the Covid-19 pandemic, more than 95 million people are estimated to have already cast ballots, highlighting the raw passion in what is turning into a referendum on the norm-shattering Republican’s first term.

All over central Washington, businesses boarded up windows in expectation of unrest and NBC News reported that a new “unscalable” fence was planned around the White House, which has been behind growing layers of fortifications since a summer of anti-racism protests.

While the Trump administration warned of left-wing extremists causing havoc, the president’s supporters made their own show of force, driving in caravans of flag-bedecked pick-up trucks and blocking roads around the country.