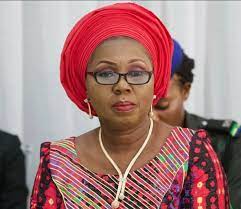 Wife of the Governor of Ondo State, Arabinrin Betty Anyanwu-Akeredolu, has said the best way to identify a leader is through traits and actions.

She said this, Wednesday, while interacting with Bemore participants during leadership training being part of the life-enhancing skills the girls are exposed to in the course of the two weeks intensive training.

“I totally agree that leaders are not born. It is through one’s actions that we put on display that people recognize that a leader. Through actions, leadership traits are discovered. The courage to face the crowd is one of those traits.

“For girls who have underwent bemore training, one of the evident transformations you can see in them is the ability to face a crowd and speak confidently. Girls who came in as timid persons are usually changed to confident individuals at the end of the training.” She said.

Speaking to the trainees on the fourth day of the two weeks programme, Arabinrin commended the efforts they are putting into learning, saying, ‘I hope to see progress in your speaking ability as you continue with the training.’

Arabinrin said, “We recognize the tendency to make mistakes while on the learning curve but we will give you all the encouragements that you need in the process, so that as practice progresses, you might find the natural inclination to be the best at it.”

The leadership class, held at Igolo Abiam Place, Wetheral Road, Owerri, Imo State, Nigeria, is meant to expose the girls to the nature of leadership, dynamics and qualities of leadership, and leadership responsibilities.

Story by Media team of the office of Ondo State First Lady.