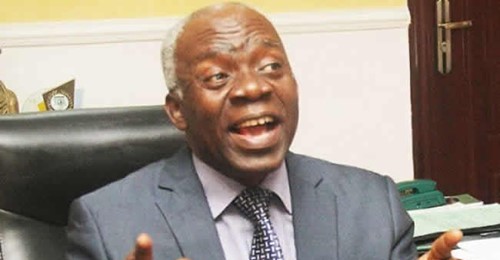 Human rights lawyer, Mr. Femi Falana, has urged the Federal Government to dialogue with #EndSARS protesters and meet their demands.

According to him, if the government is negotiating with terrorists and kidnappers, it should also dialogue with the protesters.

The Senior Advocate of Nigeria, who spoke on Wednesday night during a television programme in Lagos, also asked the Inspector-General of Police, Mohammed Adamu, to order his men to protect #EndSARS protesters from being attacked by hoodlums.

Thousands of youths across the country have in the last one week been protesting against the harassment and extrajudicial killings perpetrated mainly by the Special Anti-Robbery Squad of the Nigeria Police Force.

The police authorities have since disbanded the unit and announced the Special Weapons and Tactics unit as its replacement.

However, the protests have continued with many demanding for more reforms.

Speaking on Wednesday night, Falana said, “I will like to call on the government to stop allowing armed thugs or hoodlums to attack protesters who have conducted themselves peacefully, maturedly and patriotically.

“If everybody had recognised that these young men and women played positive roles in drawing the attention of government and the authorities to the crisis in the Nigeria Police Force, they should not be attacked. In fact, the law says protesters shall be protected by the police.

“The Police must protect protesters.

“The President has a duty today to reconstitute the Nigerian National Human Rights Commission.

“The Accountant-General of the Federation has a duty tomorrow to open an account that will warehouse the money that has been earmarked under the Police Trust Fund to fund the police.

“My advice to the President is to get all the agencies of government to carry out their statutory duties.

“The government must engage in dialogue with the leaders of the protesting group. After all, the government is negotiating with terrorists and kidnappers. So, why don’t you negotiate with patriots like the young men and women that are protesting all over the country?

“There has to be a full-fledged Inquiry that will support a Judicial Commission of Inquiry to sit in the open like the Oputa Panel and investigate the atrocities of all the extrajudicial killings by SARS agents.

“If the government can put all these in place and these can be done in three days, the young men and women can now be persuaded to leave the streets.

“I have been speaking with some of them and they have been saying if they leave the streets, nothing will happen. So, let the government roll out the resolves and actualise its promises.”